The holiday season is in full swing, and Thanksgiving is just a couple of days away. Everyone celebrates Thanksgiving a bit differently, so we thought it would be fun to ask around and feature a list of ten traditions to get us in the Thanksgiving spirit.

Some families have a secret family recipe that is passed down from generation to generation. Whether it’s a great-grandmother’s apple pie from an old book that only your aunt has or secret seasonings to go on a fried turkey, Thanksgiving is all about getting a taste of those special dishes. Who knows, maybe that recipe will get passed on to you one day.

If you are a part of a big family, then odds are you probably need to get out of the house for a bit. Whether that is going on a nature walk or getting a game of touch football together, being outdoors can be good for everyone. Also, the South is pretty good about having moderate weather on Thanksgiving, so knock on wood for some beautiful fall weather this year!

Before eating any food, some families go around the dinner table and tell everyone what they’re thankful for. It is a classic Thanksgiving tradition that involves a lot of reflection and can spread some love and positivity that’ll last way longer than the food does.

Some people look forward to creating traditions with their new family or friends. Some do a ‘Friendsgiving’ to celebrate the friendships they have created over the year. Others create a new tradition just for them and their new partner like this creative idea from one of our Renasant employees – the Turkey Pot Tradition. ‘We start putting leftover bills and change in an old pot on Thanksgiving and continue doing so until Christmas Eve. On Christmas Eve, we sit down, add up all the change, and divide it between us. We pick a store, go to the store, and end up having to hide from another as we buy gifts. We go home, wrap them, and open them on the same day! 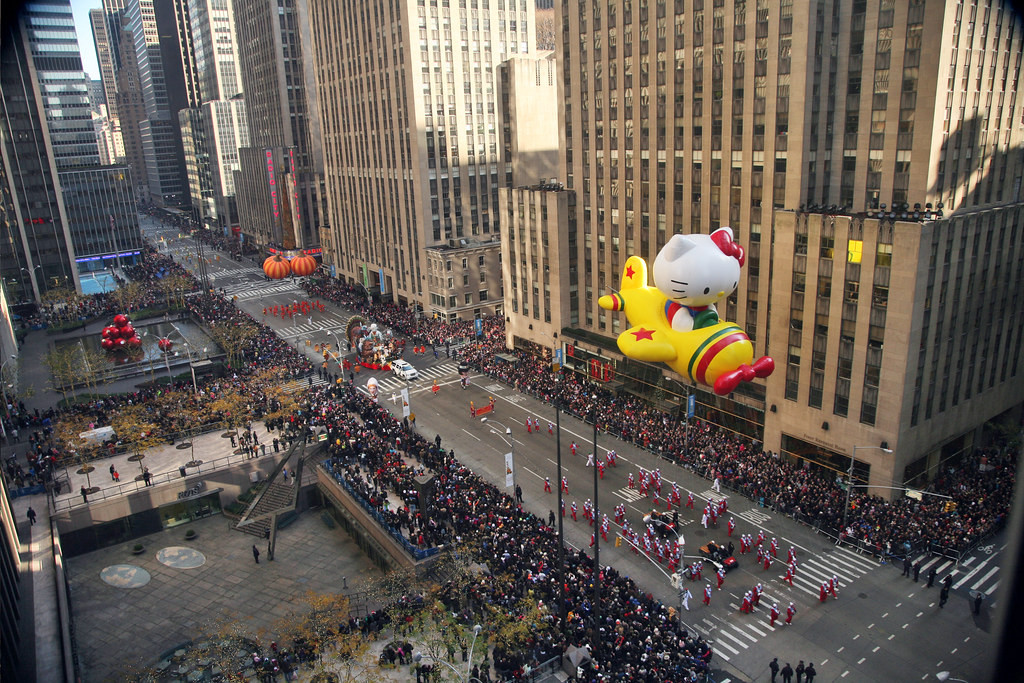 The floats. The bands. The big blimps. Macy’s Thanksgiving Day Parade is never going away! Most adults grew up watching it and now look forward to watching it with their children. Every year, they include a great mix of old and new floats, so there’s something for everyone to spot and relate to. The only hard part is getting out of bed to watch it.

This time of year is important for both college and professional football. The games played on Thanksgiving and during the weekend that follows can determine bowl games, playoff appearances, and who will have bragging rights for the following year. Full bellies and clear eyes will be locked on the screen for the next couple of days.

There are two types of people in this world: Those who start Christmas decorating right after Halloween and those who wait until the day after Thanksgiving. Some even start to get lights up and play Christmas songs as soon as dinner is done. The debate of which side is right may never be settled.

Most towns host 5ks and fun runs the morning of Thanksgiving. It’s fun way of getting the family together up and early to get some exercise before all the food that is certainly coming your way. Gobble Gobble!

Something that a lot of families look forward to? THE NAP. They’ll eat the main meal, some yummy dessert, put on some smooth holiday jazz or football on the TV, and then fall asleep. It could be 10 minutes, it could be an hour, but once they wake up, they’ll be ready for the after party or probably eat more food.

You would think Black Friday would start on Friday, and not at 5 p.m. on Thursday, but what are you going to do? Shopping with family members on Black Friday can take some stress away from the inevitable Christmas shopping. It can even become a teamwork activity! Good luck with everything though, and stay safe no matter where you are.

Renasant's Mobile App can help you keep track of your finances during this hectic shopping season.

Renasant Named One of Forbes’ Best Banks in the World

Renasant Bank celebrates and recognizes Juneteenth as a time to reflect and engage in helping to end inequity in our communities.

Top 10 Things to Do During a Quarantine