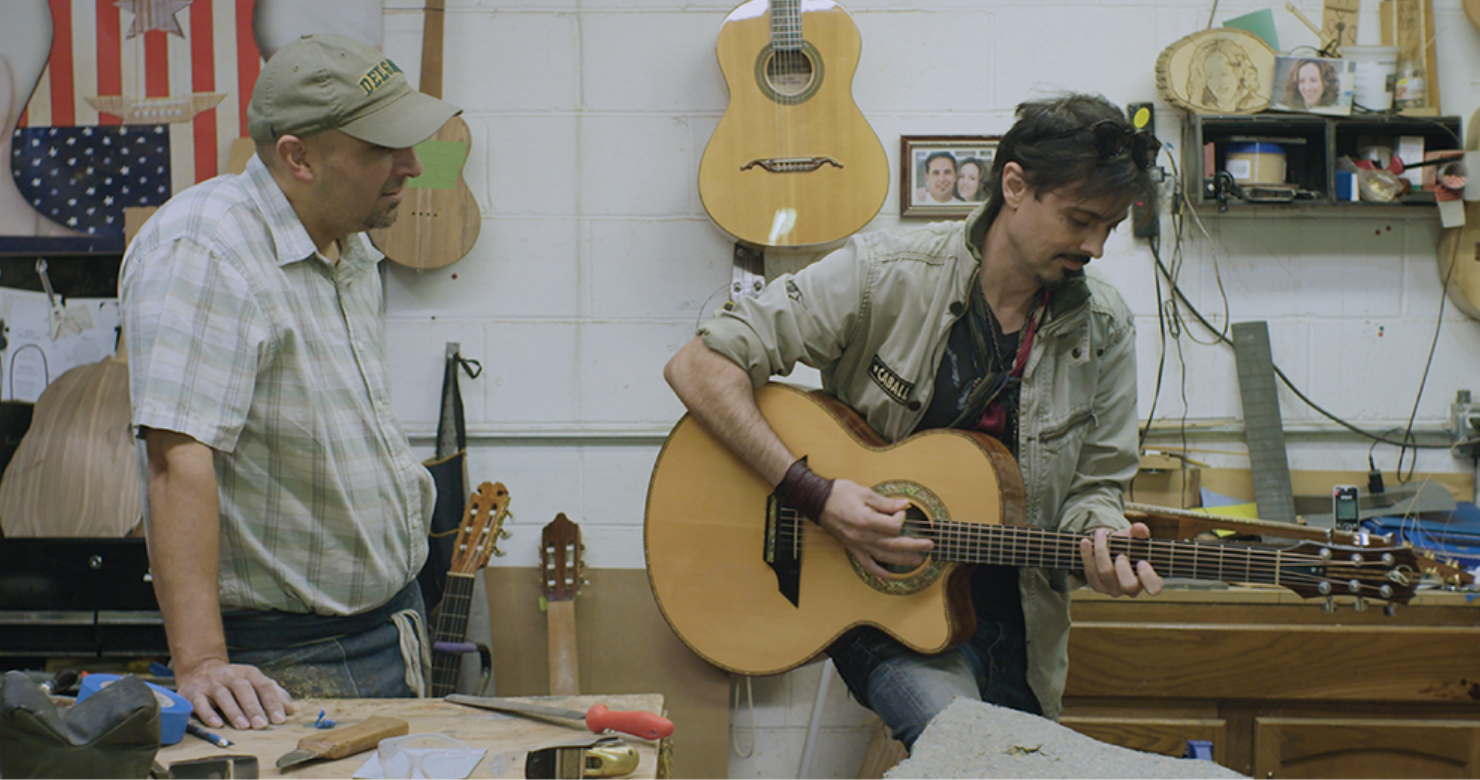 The wood in Manuel Delgado’s East Nashville guitar shop, Delgado Guitars, speaks to him, telling him what it wants to become.

“I really do believe that the actual piece of wood kind of tells you what it wants to be,” he said. “There was a piece of maple, and I had it in my shop for seven months. But one day I looked at it, and I saw exactly what it was going to be. And that’s exactly what that piece of wood became.”

Manuel Delgado’s craft, building guitars completely by hand, is one that honors three generations of his family’s history.

He quotes English author G.K. Chesterson, “With art and morality you have to draw a line somewhere, and that’s kind of how we look at it,” Delgado said. “We’ve drawn a line. We’ve made a decision to make sure we stay true to that old-world style of building instruments.”

Delgado’s guitars begin with a conversation. He sits down with each musician he’s building an instrument for to learn more about their personality and find out how they’ll use their guitar.

“I find out about things that are important to them, that they’re passionate about,” Delgado said. “Those things that they tell me, I transfer into different images or colors that we’ll use on the instrument.”

Following the interview, Delgado has a mental picture of the guitar. He picks the body style and wood, and then begins sketching. Then, after about 200 hours of hand crafting, the guitar is ready to be strung and played.

“After it’s sat and we’ve played it, and everything sounds good, then we put the label on it,” he said. “It’s almost like saying, ‘We approve.’ We’ll put our family’s name on this instrument because now it has our blessing.”

Delgado’s great uncle, Candelario Delgado Flores, and his grandfather, Porfirio Delgado Flores, were musicians and craftsmen who made all the instruments for their band, Son Torreón. The hobby turned into a career when they rented a shop on Xavier Mina Street in Torreón, Mexico.

In 1937, the brothers relocated to Juárez, and Candelario opened another store in El Paso, Texas, nine years later. As the demand for their instruments grew, they opened a new shop on L.A.’s Sunset Boulevard, where they built guitars for more than 30 years.

Delgado started playing guitar when he was five, began making repairs in his father’s store at seven, and built his first instrument by the time he was twelve.

Then, in 2005, he opened his own Delgado Guitars shop in Nashville.

“Everything we do here has always been done by hand,” Delgado said. “People use the term ‘handmade,’ but they’re using methods that are known for mass production, and for us it’s a labor of love. It’s important for us that we’re honoring the history that’s been passed down to us.”

“One of the greatest honors was working with Los Lobos, because they’ve known me since before I was born,” he said. “To know that my grandfather first built instruments for them, and then my dad, and to know that they still trust me—that means a lot.”

Now, Delgado is teaching his own daughter, Ava, to build guitars. At nine years old, she’s on track to have her first instrument completed by her 10th birthday.

“To get to come to work every day and do what you love—how man people get to do that? Not a lot, unfortunately,” he said. “I’ve always said I hope that I would be remembered as being…a great father and being a great husband and being a good friend, and then, down the road, they’ll say, ‘Well, he made some really great guitars, too.’”

When Terry and Dottie Smith of Birmingham, Alabama, decided to start a bakery, they didn’t know what their business would become. “Dottie and I were talking about how the south of Birmingham was [...]